Menu
A proposal to an undisclosed propsective candidate by Democratic political consultants Ian O’Hara and Matthew Snyder of Realization Management seeks an astounding $72,000 in fees to manage a campaign for the Pinellas County Commission.

O’Hara and Snyder’s proposal is outlined in a series of e-mails and documents provided to me by an anonymous source. 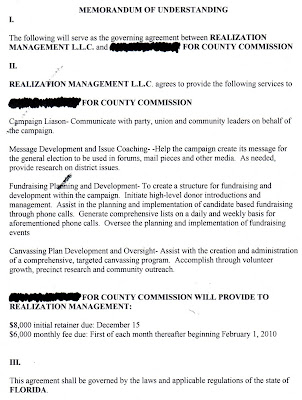 I’m not sure who O’Hara and Snyder drafted the proposal for. What is clear is that O’Hara and Snyder think awfully high of their talents. Their proposal asks for an $8,000 retainer with $6,000 monthly payments to follow. And that’s just for “Message Development and Issue Coaching,” “Fundraising Planning and Development” and “Canvassing Plan Development and Oversignt” — nowhere in their proposal are any figures for hard costs such as advertising, printing, postage, online campaigning, direct mail, signage, etc.

$72,000 might be a fair number for a statewide race or a major Congressional race, but a campaign for the Pinellas County Commission, for which most candidates don’t even raise $72K for their entire campaign. Commissioner Nancy Bostock raised just $57,917 for her winning effort.

On Saturday, I spoke with a member of the Pinellas County Commission and asked what they thought would be a fair amount for managing a competitive countywide campaign and they said “$15,000.”

Which leaves me wondering how two consultants whose claim to fame is directing Jamie Bennett to a sixth place finish in St. Petersburg Mayoral Campaign have the cojones to ask for $72,000 for their services.

I don’t think Scott Wagman could afford those prices!