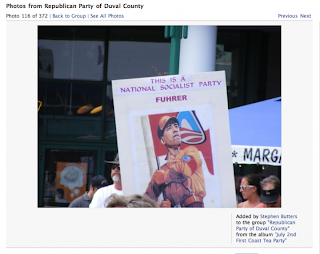 The event, which was attended by Florida state Reps. Lake Ray, Charles McBurney and Mike Weinstein and Florida state Sen. Stephen Wise, drew about 1,000 people to the Jacksonville Landing. Local party officials were on stage, along with numerous members of the Jacksonville business community, including Jay Fant of First Guaranty Bank.

While partisan rhetoric at any rally is expected, controversy has arisen over numerous signs that were prominently displayed at the gathering, including two that featured Barack Obama in Nazi garb. One sign, in fact, had altered Obama’s appearance to resemble Hitler. Other signs compared ACORN, the community organizing group accused of voter registration irregularities, with the SS—the Nazi organization responsible for enacting the Holocaust and the group responsible for most of the crimes against humanity committed by the Third Reich.

Several local GOP activists privately expressed shock that elected officials would be seen at any event that featured comparisons of Obama with Hitler. What surprised some of them the most, however, was the fact that the Duval County Republican Party would feature pictures from the event—complete with Obama/Hitler comparisons—on their Facebook fan page.

While the party has stated that they did not officially “plan” the event, the fact that they heavily promoted it and featured the controversial pictures on their website, has left them open to the ensuing controversy.

Ahead of the 2018 midterms, the Republican National Committee has brought on a new political director

A New York Mets minor leaguer with a Heisman Trophy