Baker, who said supporters came forward as they heard about his prospective candidacy, has even asked a political consultant to help coordinate the letters. Nick Hansen, who was campaign manager for mayoral candidate Deveron Gibbons, has been collecting and organizing the letters.

Today, through a public records request, Saint Petersblog has learned that Lori Matway, the City Hall administrator who oversees Baker’s schools initiatives and the “Mayor’s Mentors & More” program, has been coordinating her own letter-writing campaign, albeit on her own time, on behalf of Baker’s application. At least one of Matway’s requests for a letter-of-recommendation was made of a very prominent donor of Baker’s school mentoring program. When reached by phone this morning, Matway confirmed that she was coordinating her own letter-writing campaign, but that it was being done on her own time, although a review of Matway’s City Hall e-mail account reveals she received several responses to the requests she made on her personal e-mail account.

As for the issue at hand — whether an administrator in City Hall should be coordinating a letter-writing campaign on her boss’ behalf — I will leave that to my betters to decide.

Update: Lori Metway’s e-mails reveal much more about her involvement than what she said during our conversation this morning. She is not coordinating her own letter-writing campaign, rather she is part of the effort organized by Nick Hansen. Much of Metway’s effort (it is impossible to know how much she is doing on her own time) is being done during the workday via her official e-mail account.

Matway’s day began with a 5:27 a.m. e-mail to Landry saying she will “open” the letter-of-recommendation for Baker “when I get in the office and get back to you.”

From there, Matway and Landry engage in a series of e-mails in which Matway guides Landry through the letter-writing process, all while Matway is on the clock at City Hall. Matway instructs Landry that the letter should come “from the direction of Mayor Baker’s support of the Mahaffey Theater and the educational programs offered at the theater. It doesn’t have to be long. You know the selction committee probably won’t even read it!” 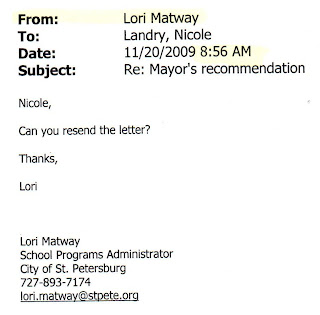 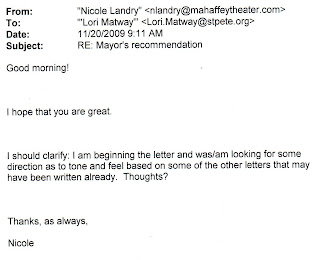 Those are the key words: “I can’t work on Mayor’s SPC campaign on city time.” Yet, that is exactly what Matway did.

Coordinating with Joanne Marrazzo, executive assistant to Elaine Liftin, President of the Council for Educational Change, at 11:41 a.m. on 11/16: 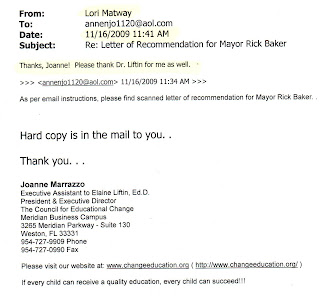 Coordinating with Sherry Clarke, PASS Coordinator for the Council for Educational Change, at 5:26 a.m. on 11/20: 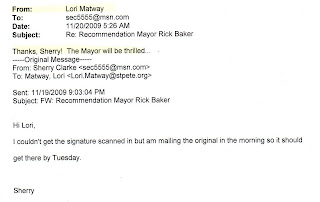 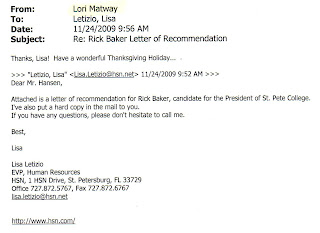 But the real issue here is why is Matway involved in this project at all. These public records reveal only a fragment of Matway’s full involvement. Ms. Matway seems to be well aware that she should not be coordinating this letter-writing project on city time, yet that does not keep her from, on city time, pro-actively interacting directly with Nick Hansen, the so-called political consultant Baker hired to coordinate the letter-writing campaign. 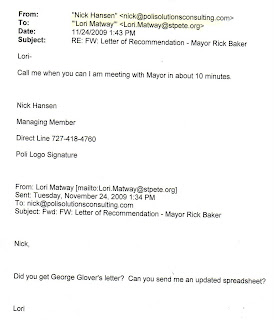