Were I a betting man— and Alan Suskey can tell you I am not — this would be my prediction for how the electoral college vote turns out. 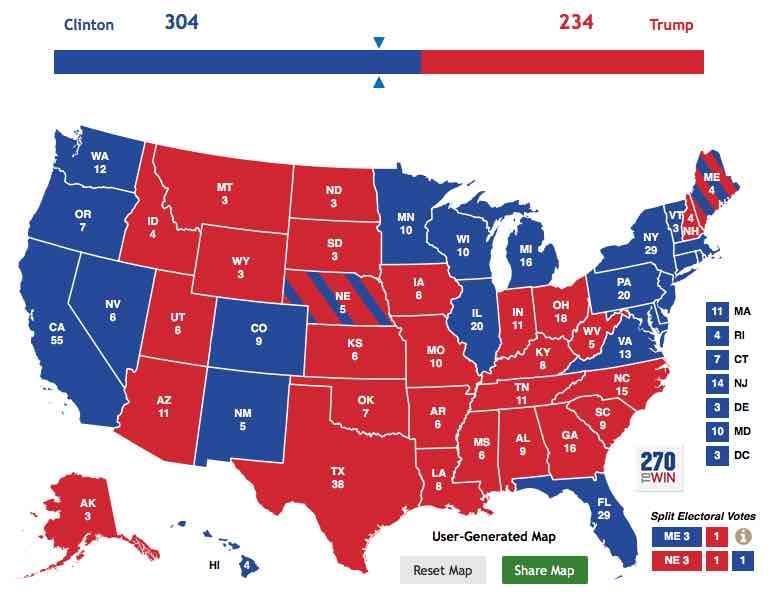 Here is a quick rationale:

Nevada should have gone for Trump. In fact, I am surprised Sheldon Adelson and the boys aren’t making it happen. But Jon Ralston, who is basically the Marc Caputo and the Adam Smith of the Silver State, says Trump is dead there and that’s good enough for me to award the state to Clinton.

New Hampshire goes for Trump because it is the land of cantankerous white people and if any demographic is Trump’s base, that is it. Also, a lot of recent polling has shown Trump tied with Clinton, if not outright leading. The Live Free Or Die state appears to be breaking for Trump.

North Carolina goes for Trump, despite what Monday’s Quinnipiac poll shows because if there is one place there are “shy Trump” voters, it’s in the Tar Heel state.

As for the rest of Clinton’s “blue wall,” including Michigan, it remains intact.

Clinton doesn’t need Florida to win, but Trump does and up until last Thursday, I was prepared to give him the Sunshine State. But reading Ryan Tyson‘s polling memos and seeing the early voter turnout in South Florida from the weekend has me believing Clinton will win the state’s 29 electoral votes.

Anyway, that’s my prediction. What’s yours?