Menu
At its December meeting, the Florida Commission on Ethics found probable cause that St. Petersburg City Councilman Jamie Bennett misused his position by offering tickets to Tampa Bay Rays baseball games, provided by the City, for the benefit of his campaign:

While ostensibly distributing the tickets in accordance with City policy by handing them out to heads of neighborhood associations, preliminary evidence indicates that Respondent’s primary purpose for distributing at least some of the tickets was for garnering political support for his mayoral campaign. In particualar, his then-campaign manager, Peter Schorsch, assisted with distribution of tickets. According to Mr. Schorsch, their strategy while canvassing neighborhoods for Respondent’s election as Mayor was to seek endorsements from the neighborhood leaders prior to the other candidates and that offering them tickets gave them an opportunity to speak personally.Two other instances detailed in the Report of Investigation strongly suggest that Respondent was distributing tickets for political gain. In the first incident, Torii Morgan, President of the Coquina Key Neighborhood Association, reported that she felt the tickets were given in order to influence her support for Respondent’s campaign because Mr. Schorsch identified himself as Respondent’s campaign manager and that he was operating on behalf of the Respondent and his campaign. According to Ms. Morgan, when she met Respondent and Mr. Schorsch to pick up the tickets, both Respondent and Mr. Schorsch asked if they could attend her next next association meeting to discuss Respondent’s campaign.

In summation, this is what I have said all along about this matter.

From here, a formal notice of hearing has been sent to Jamie Bennett. The Commission may resolve a complaint through a stipulation, settlement or consent order. (The complete documents with the recommendation and notice against Jamie Bennett can be found after the break.)

The only problem with the story is that the fine was not related to a political ad written in sidewalk chalk — A fact of which both Silva and Jamie Bennett seem unaware. Silva writes:

The complaint stems from a chalk message written on a Central Avenue sidewalk advertising a Bennett fundraiser.

Bennett said the chalk artist forgot to add the required disclaimer. He paid the fine to put the matter behind him.

“The campaign was over,” he said. “I wanted to close it up.”

Again, the only problem with this story and Bennett’s account is that the fine had nothing to do with the ad a chalk artist wrote on a sidewalk.

Jamie Bennett, candidate for Mayor of St. Petersburg, distributed the attached invitation, to a campaign fundraiser. The invitation is clearly advertising for a campaign fundraiser, using the language “Campaign Fundraiser.” However, the invitation does not have the proper disclaimer as required in Sections 106.025 and 106.143, F.S. Not only is part of the disclaimer shortened (Pd. Pol. Adv.), but more importantly, the flyer omits the language: The purchase of a ticket for, or a contribution to, the campaign fund raiser is a contribution to (Name of the candidate for whose benefit the campaign fund raiser is held).”

In addition to the attached flyer, I am attaching a screen shot of his website in which his fund raiser is advertised. In addition, I have attached an online story from the St. Petersburg Times discussing the fundraiser (incidentally, Mr. Bennett paid for chalk art to advertise for the event yet did not utilize the appropriate disclaimer on that either.)

In other words, I was complaining about this… 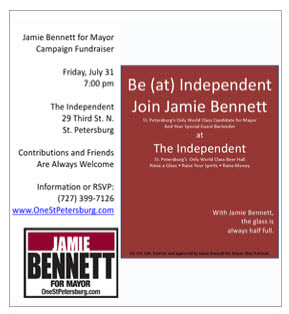 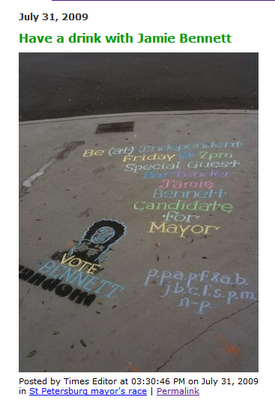 I would think a good reporter like Cristina Silva would know that if you are going to write a story basically about dotting i’s and crossing t’s, a reporter should make sure they get their facts right.

But the real bumbler in this matter is Jamie Bennett. Of course, he left the disclaimer off an invitation, but I blame his campaign brain trust — Matt Snyder and Company over at Realization Management for that as much as anyone. What you really have to wonder is why Jamie Bennett paid a fine for something no one complained about. 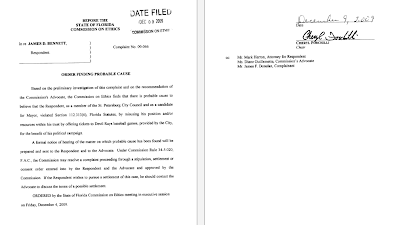 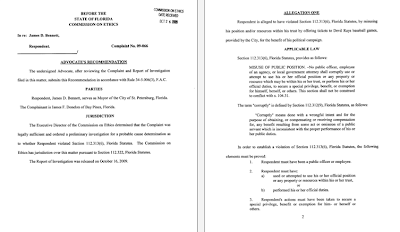 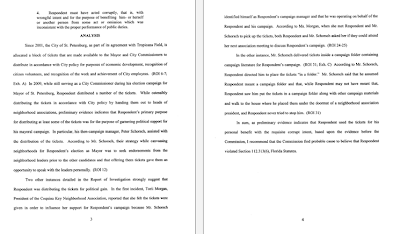 My complaint to the Florida Election Commission: 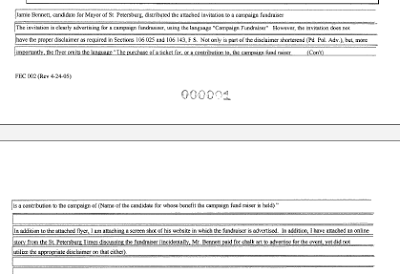 St. Petersburg officials have maintained for years they believe the Tampa Bay Rays franchise will eventually

I always suspected Joe Maddon, a smart man, wanted the chance to say out loud that

St. Petersburg officials have maintained for years they believe the

I always suspected Joe Maddon, a smart man, wanted the