Florida’s safety net for people in need is shredding in the face of escalating demand and dwindling resources, says the head of the state’s United Way network.

And Florida’s safety net is almong the nation’s weakest.

Ted Granger, president of United Way of Florida, says social service agencies statewide are seeing more and more people who are homeless and hungry. The 211 referral hotlines are seeing increases of 50% to 150% over the last twelve months in people needing basic services, such as assistance with rent and food.

“We’re struggling as United Ways across the state,” Granger says. “We’re probably going to raise less money this year than we did last year at a time when the need is skyrocketing. So it’s very difficult, particularly when you’re sitting at an agency and you’re receiving calls for help and there’s nothing you can do.”

Granger says the coming year will likely be worse for social services, as Florida’s foreclosures are expected to increase and its unemployment numbers to remain high.

Read the WFSU report here. There’s an audio clip, too.

This is the state of our safety net in the face of new numbers which show Florida is second in the nation in the increased number of food stamp recipients who have no other cash income. 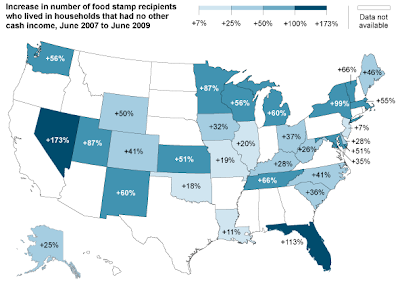