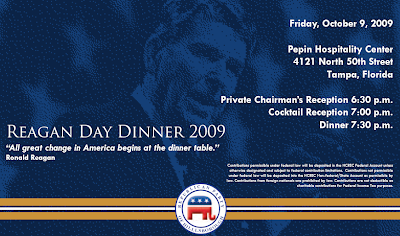 A behind-the-scenes showdown between Charlie Crist’s campaign and organizers of the Hillsborough County GOP’s Reagan Day Dinner is coming to a head as ticket sales for Friday night’s dinner at the Pepin Hospitality Center have slowed to a trickle. According to one organizer, who asked to remain anonymous as negotiations continue between Crist’s campaign and the Hillsborough GOP, only 68 tickets to the event have been sold. Originally, expectations for ticket sales were set in the 250-300 range, but as this organizer says, “No self-respecting Republican wants to pay to hear Charlie speak.”

A prominent fundraiser close to the Crist campaign contends it isn’t the campaign’s fault that tickets to the event aren’t selling, citing strong attendance at other similar events. But the organizers of the dinner place the responsibility for the lackluster sales squarely on Crist’s shoulders: “We would have been better off booking Rubio.”

Update: Hillsborough County GOP Chair Deborah Cox-Roush called me to let me know that, although ticket sales started out slow (which she says was due to the economy), she expects more than 250 people on Friday.

I went back to my original source on the matter, a prominent operative based in Tampa and he confirmed that Cox-Roush contacted him last week and said thonly 68 tickets had been sold.