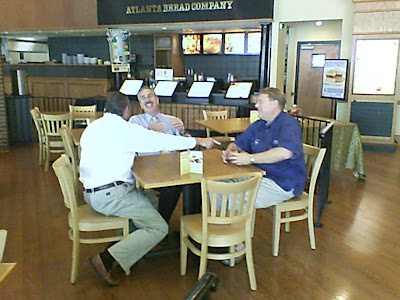 So, like, I totally disagree with Bill Foster’s politics. In fact, if Bill is for something, I’m probably against it. And vice-versa. What’s worse is, Bill’s consultant, Jack Hebert, is my mortal enemy. So I haven’t missed a chance to bust Bill’s balls at every opportunity.

But that doesn’t mean I don’t like Bill Foster. In fact, I really like Bill Foster. The guy is hilarious. I’ve run into him several times on the campaign trail and he’s been a riot every time. On Friday, Jamie and I saw him and the Mayor at Atlanta Bread Company and Bill couldn’t stop razzing us about the controversy over the baseball tickets. Foster had new lines for me when I saw him on Saturday at Albert Whitted. Of course, I give it right back to him. For what it’s worth, Bill says he loves my articles lambasting the Foster Formula.

Listen, I’m probably never going to vote for Bill Foster, but I wouldn’t mind it if he were Mayor. He’s not dangerous like Kathleen or ego-maniacal like Scott Wagman. My only problem with Bill right now is I’ve seen him in the same shirt three times in a row. C’mon Bill, you roll in a Lexus, you gotta have a second shirt.