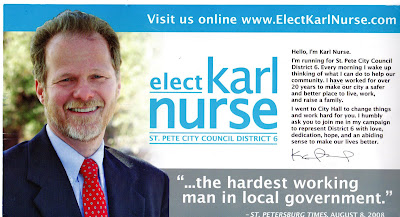 The reverse has a couple of niiiicccceeee pictures of Obama and Morpheus. Karl basically is pulling a reverse Deveron, who sent out a mail-piece chock full of pictures of Deveron and Wonder Bread. 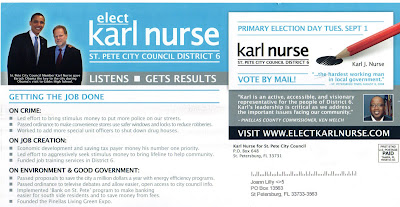 I guess I have to give this piece a “B” because it’s so damn nice. The front is about as good as you can get without trying too hard. But all of these candidates with black-and-white cookie pictures — Deveron with the nice white people on the porch, Wagman with Morpheus and Wengay, now Karl with Obama — is becoming a little too ebony and ivory for me.

To reference Seinfeld (again), these candidates all remind me of the episode in which George drags Jerry’s exterminator, some black dude named Carl, out to dinner so he can accidentally run into his black boss who thinks George is a racist because he said he reminded him of Sugar Ray Leonard.

Speaking of hijinks, here’s is Vel Thompson’s mailpiece. I guess she doesn’t have any cool white people to pose with her.