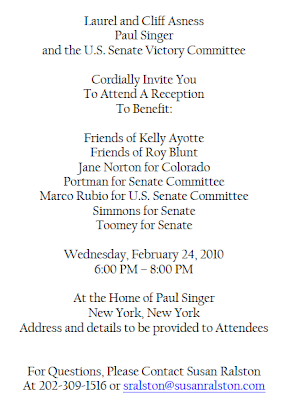 Marco Rubio will be one of seven U.S. Senate candidates benefit ting from a fundraiser by New York hedge-funder Paul Singer. What’s really interesting is that fundraiser is being held under the umbrella of the U.S. Senate Victory Committee, which was recently organized as a joint fundraising committee that will distribute funds to the seven Republicans who were identified on Federal Election Commission paperwork as participants in the venture.

All seven Republicans face opposition in the primary elections, though most are expected to win. Rubio is taking on Gov. Charlie Crist (Fla.) in a competitive GOP primary that has attracted national headlines. Simmons is vying with Linda McMahon for the seat of retiring Sen. Christopher J. Dodd (D).