Menu
Like the proverbial sorority sister who “experimented” with kissing girls while an undergrad, I dabbled in Republican politics in my early 20s. Those were heady days: Newt Gingrich was Time Magazine’s Man of the Year, former Indianapolis Mayor Stephen Goldsmith, among others, was infusing the GOP with compassionate conservatism and leaders like Jeb Bush towered over the political landscape. Heady days, indeed. Then the Recount happened and then W emerged and it wasn’t long before I returned to my Democratic roots.

Still, when I hear an impassioned conservative like Marco Rubio speak about “American Exceptionalism” I can’t help but feel inspired by his message. I mean, Charlie Crist is still talking about his grandfather Adam coming to America, which is basically his way of talking about himself. And Kendrick Meek has yet to find his voice as a statewide leader, despite being on the right side of the issues I care about.

Yet, where Rubio loses me, and where he will lose many moderate voters, is when he embraces the worst impulses of the lunatic wing of the Republican Party. Last week, during his speech to PCREC, Rubio came dangerously close to comparing Barack Obama’s America to Fidel Castro’s Cuba. Two days before that, Rubio signed Glenn Beck’s 9 Principles, 12 Values pledge, which, as it is written, is all well and good, but should a candidate for the U.S. Senate really be signing pledges written by a talk-radio host?

But the worst thing Rubio said last week came when he had this to say about the prospect of receiving Sarah Palin’s endorsement:

Asked if he would welcome the support of former GOP vice presidential candidate and Alaska governor Sarah Palin, Rubio offers an unqualified yes, adding that “I can’t think of anything her and I disagree with off the top of my head.”

Below, you’ll find the Real Clear Politics Florida polling averages from the 2008 Presidential election (h/t to The Miami New Times). You’ll notice John McCain had a healthy lead for most of the summer. Highlighted is the day Sarah Palin was announced as his vice presidential candidate. You’ll notice a sizable post-convention “Pitbull in Lipstick” speech bump, and then a sharp and severe decline, which, perhaps coincidently, coincided with a number of Palin fumbles. Obama would take the lead in Florida polls for the first time in the election. A lead that remained until November 4. 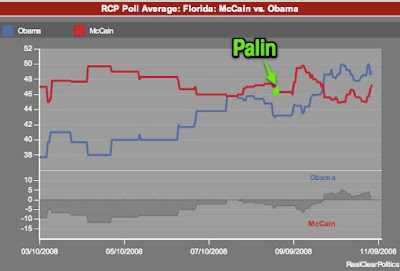 Rubio is running into his own problems with the media today. As first reported by 16-year-old blogger YJ Carmon and now seconded by the LA Times, one of Rubio’s campaign ads looks eerily similar to an ad run by the Barack Obama campaign. At least by copying Obama’s ad, Rubio didn’t subject us to another ad as cheesy as this one.