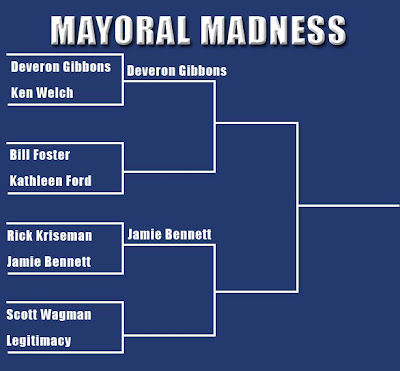 After yesterday, with both Rick Kriseman and Ken Welch nobly deciding not to run for Mayor of St. Petersburg, political observers we are left with a much clearer “playoff picture.” The race is still in the first round, but the paths to victory for some candidates are now much more defined.As I saw it, only either Deveron Gibbons or Ken Welch could move forward by consolidating the African-American vote. With Welch’s departure, Gibbons wins an entire voting block, if only by default. Using a poker concept calledimplied odds, Deveron can safely expect to receive at least 17% of the vote in the primary.Already a top seed, Jamie Bennett (disclosure: I am a volunteer on Jamie’s campaign) is the other contender who won big yesterday. With Kriseman’s withdrawl, Bennett was ceded a huge swath of political geography. More importantly, he is now the standard-bearer for the city’s Democratic and progressive voters. And don’t discount the fact that he is also the only candidates still in office.

As for the other match-ups, there can only be one anti-establishment candidate, so Kathleen Ford and Bill Foster, while often on the opposite ends of the politician spectrum, will have to sort things out as to who will represent the anti-Baker vote.

And as far as Scott Wagman goes, I know he’s out there working. But he is still the big unknown in the race. That’s why his opponent right now is legitimacy. If he does what he says he’s gonna do and drop some heavy coin into the race, he’ll make it easily into the second round for a showdown with Bennett for the Times endorsement, Karl Nurse’s network and the support of progressive voters in the Old Southeast, Kenwood, etc.

The winner of this match-up could easily end up with 24% to 28% of the primary vote and would be the front-runner out of the primary against Gibbons, Ford or Foster.