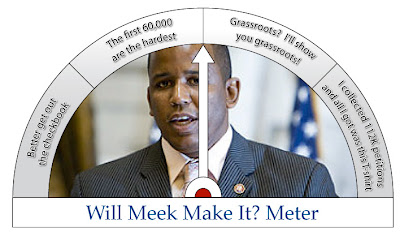 “We Floridians deserve an up-and-down vote on health care,” the Democratic candidate said at a campaign rally here. “There can be no ‘let’s start all over again.’ We can’t move the goal post further and further away. We need health care and we need it to be affordable.”

Meek, who addressed 50 supporters at the St. John’s Missionary Baptist Church, said he’s less than 10,000 signatures shy of obtaining the 112,476 he needs to become the first statewide candidate ever to earn a spot on a ballot by petition. The petition must be filed by March 29.

Meek said his petition drive makes him the candidate of the people.

“It’s a grass roots movement, and so many people are taking part in this historic movement,” Meek said. “It shows that we are organized, believe it or not, as Democrats. Independents and Republicans will also play a role in that effort, and I’m excited about it.”

Based on Meek’s comments, I’m ready to upgrade his chances on the Will-Meek-Make-It? Meter.