Menu
From 538.com: Sarah Palin’s political action committee — SarahPAC — raised $733,000 in the first half of the year and is set to push past $1 million in the wake of the recent attention she’s gotten herself. On the one hand, this isn’t that impressive. Mitt Romney, for instance, has raised twice as much. Kay Bailey Hutchison, Palin’s sometime rival who is now running for governor in Texas, raised nine times as much. For somebody with a political celebrity dwarfed only by Barack Obama’s, that’s just not all that much cashflow.

What is impressive about Palin’s fundraising haul, however, is who it came from: the grassroots. Based on her FEC disclosures, I identified 406 donations worth $200 or more, which are worth a combined total of $289,932. That’s nothing, really: Home Shopping Club can bring in that much in 15 minutes selling vacuums. That leaves, however, $443,608, or 60 percent of SarahPac’s total, which came from small donors. That is a very high percentage — higher than for any of the ’08 presidential candidates but for Ron Paul — as you can see from this chart where I’ve colored Palin’s total in Misogynist Pink. 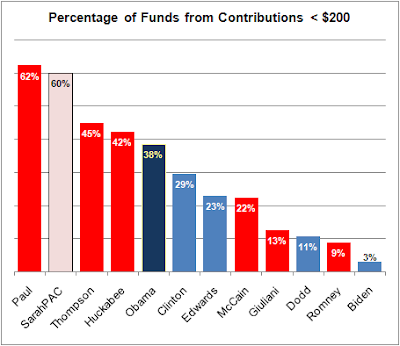 You don’t wind up with a number like that unless two things are happening: you are raising a lot of money from small donors and you specifically are not raising a lot of money from large, establishment donors. That, in a nutshell, is Palin’s story as she starts to compete against the GOP primary field. I’m not convinced that fundraising is actually going to be that much of a strength of hers in the primary: she’s going to have too much of the country club money soaked up by Mitt Romney (the general election might be a different story). But as Barack Obama discovered, small donors have a way of turning into activists and, ultimately, voters.