State Rep. Paul Renner pledged military-unit-like reliance on teamwork and full collaboration after he was elected by his Republican peers to be their leader-designate.

The Palm Coast Republican won on a first ballot during a closed-door meeting of Republican members of the freshman class Friday. He beat out J.W. Grant of Tampa, Erin Grall of Vero Beach, and Bryan Donalds of Naples. 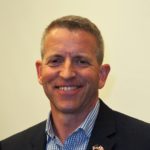 Renner, a retired U.S. Navy Reserves commander and attorney, spoke of teamwork and collaboration, said his class is deep with expertise and experience and he intends to use that to the full extent.

He received 16 of 27 votes on the first ballot. Details of what the other three candidates received were not released.

“I think one of the things I spoke about is that every member of the team is critical. That is something I learned in the military, from the first day of boot camp. You learn that you succeed or fail as a team,” Renner said.

“The focus I would like to have is we have a great class, we can do great things together, and I want to be the facilitator,” Renner said.

Exactly what Renner or the other three said in their ten-minute speeches, or how the other Republican representatives responded, may never be known. The lawmakers gathered in a hotel near the Orlando airport and met in secret for nearly three hours before announcing that they elected Renner.

Unlike other recent Speaker elections in the era of term limits, this one was put off until after the Session to give the members of the class a chance to get to know each other and pick a leader from among people with whom they’ve worked.

“We’ve got a process here that will leave you with a class united,” House Majority Leader Ray Rodrigues said to Renner. “It’s good for your class and more importantly it’s good for the institution.”

Florida cities and counties are in a dilemma about pot. State lawmakers approved regulations in June

A Miami-Dade County Republican will again try to pass legislation

Florida cities and counties are in a dilemma about pot.