Menu
I just found this photo on the Pinellas Republican Party Executive Committee’s Facebook page and have contacted Rep. Darryl Rouson for his reaction: 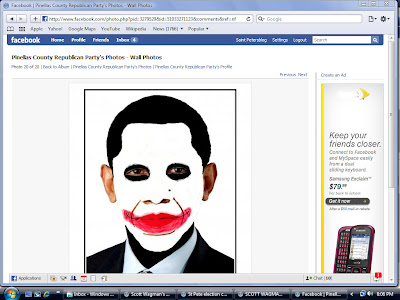 Although the title of the picture is “Evil Clown,” and the image bears some resemblance to The Joker of Batman lore, how can this picture not be construed as a racially-motivated attempt to literally paint Barack Obama in “whiteface”? Or basically, the opposite of this: 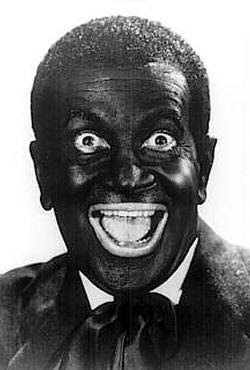 After the imbroglio over David McKalip’s emailing of a racist depiction of the President, you’d think the folks at Pinellas GOP headquarters would know better.

As Janet Cruz-Rifkin of the Hillsborough Hispanic Caucus, the photo “makes me angry but it really is an embarrassment to Republicans who don’t act this way.”

Latest update: Assistant Pinellas State Attorney Bill Burgess, who is involved in the Facebook page…doesn’t understand why it is a news story, but others disagree…The Treasurer of the Pinellas Republican Party, Chet Renfo, says the picture is in bad taste and the Facebook page is not condoned or sponsored by the Party. When told Burgess about Renfo’s comments, he said that Renfo doesn’t speak for the party.

While several people shown the picture said it was racist, Burgess says it is just a way of protesting policies that Obama is putting forth and neither he nor anyone associated with the page is a racist.

10 Connects made a public records request for the websites that Burgess has visited with his taxpayer funded computer, and Burgess readily admitted that he went to the clearly partisan website with the computer, but says it was alright because it was after hours.

However, the Pinellas State Attorney’s Office sees it as a problem. Chief Assistant Bruce Bartlett told me it is totally inappropriate. While there is no written policy, Bartlett says using state computers for political purposes crosses the line.