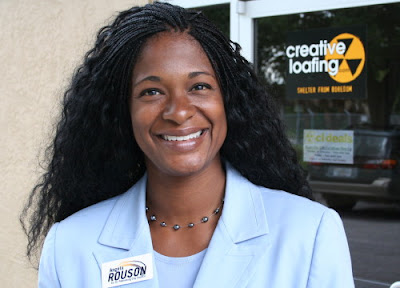 From Wayne Garcia, Political Whore: Angela Rouson stepped into the Creative Loafing recording studio this week to discuss her campaign for St. Petersburg City Council in District 5, against fellow newcomers Steve Kornell and retired police officer Joe Smith. Yes, she’s the wife of powerhouse (and controversial) African American politician Darryl Rouson; but she came off as her own person — bright, articulate, well-informed and passionate — in her recent Suncoast Tiger Bay Club event, and she likewise was engaging in this interview.

I asked her if she felt that St. Pete cops were being “reined in” and not fighting crime to the fullest of their ability, and she said:

I’ve talked with the sheriff, Sheriff Coats, I’ve talked with Chief Harmon (and done ride-alongs with both agencies), and the general consensus is there is some of that. And there is also a lack of resources to be able to address issues, because if you are going to take down, for example, a drug house, you need more than one officer on the beat. I think they are being held back to some extent, but I think resources play into that as well.

Is there a racial political component to the police being held back?

I can’t really answer that question. But what I can say is there is no rational reason for not addressing the crime. …As a member of City Council I’m going to work to make sure that the mayor works with the chief of police to be more aggressive in addressing the issues.

I also asked her — given her husband’s controversial anti-gay statement that being gay was “morally wrong” (he later apologized for saying it) — if she would participate in St. Pete Pride and about her stance on domestic partner benefits.