Their press release states: “Article I, Section 9 of the Constitution clearly states: ‘no person holding any office of profit or trust under them, shall, without the consent of Congress, accept of any present, emolument, office or title, of any kind whatever, from any king, prince or foreign state. I urge President Obama to affirm his devotion to our Constitution and seek the consent of Congress before accepting the award in Oslo, Norway, on Dec. 10.” 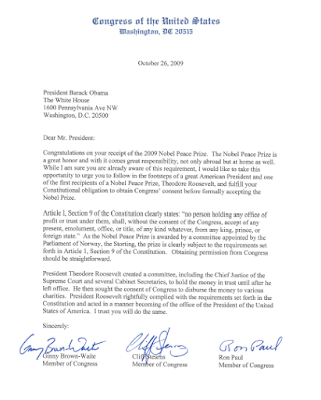 It has been said that money is the lifeblood of politics. If so, many members of

A long wait may be ahead for broad federal relief

It has been said that money is the lifeblood of