Menu
According to the official records from the Department of Highways and Motor Vehicles, Deveron Montez Gibbons’ has had his driver’s license suspended at least seven times, while also racking up at least nine separate traffic violations. Dating back to 1999, Gibbons’ record shows a clear pattern of disregard not just for traffic laws, but for the judicial system itself. His license was suspended each time for failing to satisfy the requirements imposed on him as a result of a previous offense. His driver’s license was suspended as recently as December 1, 2008, only one month before Gibbons filed to run for mayor of St. Petersburg. Pictured is the summary sheet of Gibbons’ driver’s record. All of paperwork related to each offense can be found in widget to the right or at What’s Wrong with Deveron? website, in separate posts under the corresponding date. 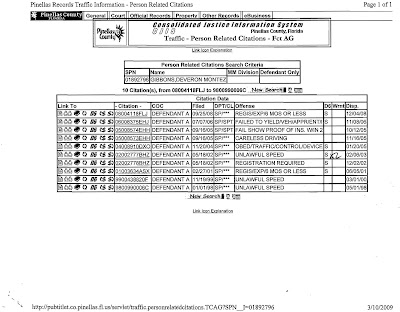 Rick Baker is looking to finish strong ahead of the St. Petersburg mayoral primary Tuesday, August

St. Petersburg Mayor Rick Kriseman travels across Tampa Bay once again this week for a Tampa

Rick Baker is looking to finish strong ahead of the