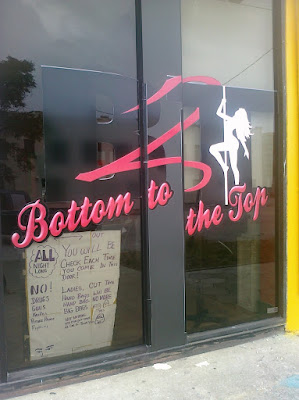 So I was talking to my good friend Mark F. last week and he couldn’t stop telling me about the new adult establishment that he visied, err, I mean opened up in his neighborhood: The Bottom 2 The Top Club.

Along with SINN, the bikini dance club which opened up next to the Scientology Life Improvement Center in Decemeber, the Bottom 2 The Top Club is the second so-called Gentlemen’s Club to open in downtown St. Petersburg in the three months (and, it should be noted, the second since Mayor Bill Foster won election).

The Bottom 2 The Top Club is located in the same building which was once home to Grand Finale, perhaps St. Petersburg’s finest restaurant at the time, at least according to me and the St. Petersburg Times’ Chris Sherman, and now it is home to a sawdust joint that displays a hand-written posterboard reminding its patrons that they will be checked for guns and drugs every time they enter the building and that the dance staff can no longer bring in “big bags” to work.

Following the worst mass shooting in U.S. history earlier this