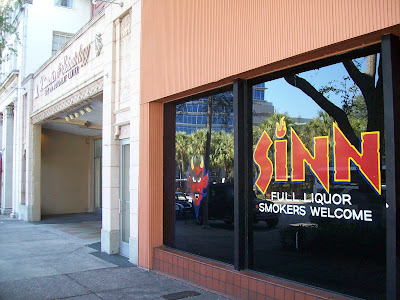 With a homeless population that probably makes Mumbai feel hospitable, the last thing downtown St. Petersburg needed was a low-grade, white-trash bikini club opening across the street from Williams Park. But there is a certain irony in the fact that this club, with a stripper pole that’s not even attached to the ceiling and dancers that make the strippers in Pinellas Park look like Victoria’s Secret models, opened up next store to the Scientology Life Improvement Center.

The 5,500-square-foot establishment has, according to this report by Sandra Gadsen, housed a cigar bar, a nightclub, a martini bar, a day spa and business offices in recent years.

I have yet to frequent this fine establishment, but as I took this picture of the inside of SINN, in which you can see the jimmy-rigged stripper pole in the middle of club, a well-dressed gentleman of the street commented to me that already the club had developed a reputation for being a rough spot as the cops were called on Friday night to break up a full-scale brawl. 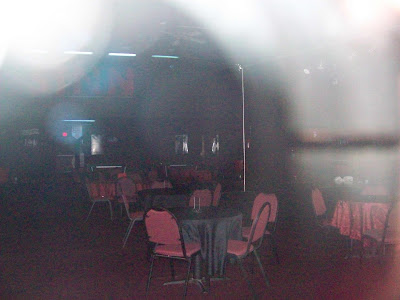 And then there’s wonderful, illuminating post on Craig’s List in response to a help wanted ad the club advertised:

“THIS PLACE IS SMALL, THE CUSTOMERS ARE SCUMBAGS, THE OWNERS ARE RUDE AND SHADY!!!!!!!!!!! They try to tell you on the phone it’s a big “club” with pool tables, entertainment…blah blah…it’s a dirty place with a stripper pole in the middle, and all they want you to do is walk around in your underwear and make no money. They don’t even pay hourly…the only way to make money is to dance on the pole, but it’s right across from Williams park and all the guys in there are homeless scummy dudes with no money. DON’T WASTE YOUR TIME. All the girls in there when we went in were miserable (not because they were bad because they weren’t making any money or having any fun).”

According to Gadsen, the owner of SINN is Heather Rardin, 35, a former manager of Mermaids, a place at 7500 Blind Pass Road in St. Pete Beach that bills itself as a “gentleman’s club” and features scantily clad dancers.

Rardin said she doesn’t want SINN “to be a gentleman’s club. I want it to be like an upscale bar and nightclub, and I want the girls to be there for entertainment.”

Rardin said that she is now open as a bar, but not yet as a club, since the waitresses she plans to use need to be individually licensed by the city as entertainers.

The special licensing is required because Rardin said she wants her waitresses to appear on the stage and remove their clothes — but only down to bikinis. Their outfits will be red and black with headpieces that feature red horns.

Rardin said she’s hoping that licensing for the waitresses will not be a problem.

Julie Weston, the city’s director of development services, did not return mine or Gadsen’s calls for comment.

I can’t help but wonder how Mayor-elect Bill Foster will feel about a bikini club opening a block-and-a-half away from City Hall.