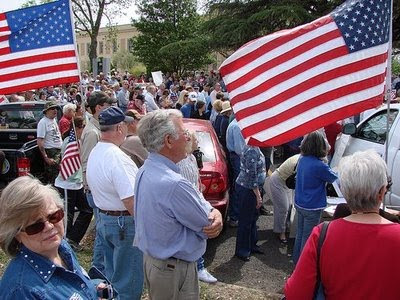 It started off as a small movement that eventually picked up the backing of multiple conservative news outlets and became a rallying point for those opposed to President Obama’s domestic policies. Now, the “Tea Party” has been registered as an official minority party in the state of Florida, according to Politico.com. The party was registered by Orlando lawyer Frederic O’Neal, who will also serve as the party’s chairman.

Still, it remains to be seen if a major-party candidate might switch over to run on the “Tea Party” line. One potential candidate could be Marco Rubio, should he lose the Republican primary for the Senate seat to Governor Charlie Crist. Rubio and Crist’s race in 2010 may be a bellwether of the struggle between the more conservative and more moderate wings of the Republican Party for overall control of the party.

According to Politico, the Tea Party is now one of 32 minor political parties certified in the state of Florida. Among the others who have been certified: The Real Food Party of the United States of America, the Prohibition Party, and the Florida Socialist Workers Party.