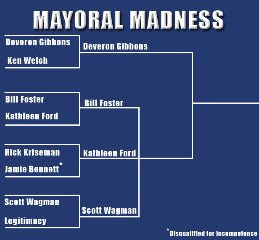 Gentlemen, start your engines…or do whatever sports metaphor you want to do because today is the first day after Memorial Day and the race to be St. Petersburg’s next Mayor is now for real. Take a look at Scott Wagman’s website and you’ll notice he’s installed a timer counting down until voting begins. For once, Scott is right (well he may right on that Harmon thing, too), the election is upon us. So I’ve updated my graphic Mayoral Madness to show where I think the race is at this point. This is all subject to change but as of right now:

Deveron Gibbons is all but guaranteed a spot in the primary. First of all, his enormous fundraising advantage makes him the front-runner. I estimate it will take a candidate receiving 23% of the vote to make it into the primary and Deveron is probably right there. The black vote reprsentas as much as a fifth of the overall vote and Deveron is going to get 90% of that bloc. And, in this case, it is a bloc. Deveron only has to spend $25,000 on GOTV efforts in the AA community and spend the rest of his money trying to make sure he finishes first in the primary.

Jamie Bennett is done. By this time next year, the Bennetts will be living in San Diego. Bennett could bring in Lee Atwater and his campaign is still doomed. And not because of anything to do with me or the events of the past month. He just doesn’t stand for anything, so why is anyone going to rally around him.

So Gibbons ends up with about 25% of the vote and Bennett still takes about 10%. Larry Williams pulls in another 10, while the rest of the also rans pull in a few hundred votes each. That leaves three candidates, Bill Foster, Kathleen Ford and Scott Wagman, to scramble for the remainder — about 50% — of the votes.

As of this point, Foster has run the most boring campaign of the three, but that strategy may end up paying off because he is beginning to emerge as the “safe” choice for everyone afraid of a Gibbons vs. Ford or Wagman primary.