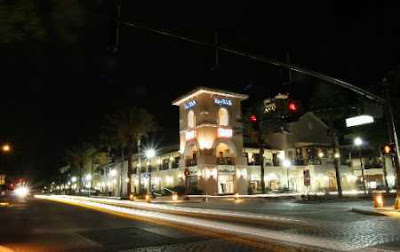 Much has already been written about the effort to vacate the sidewalk outside of BayWalk. St. Petersburg Times Editor of Editorials is already blaming the Gang of Four (Leslie Curran, Jeff Danner, Wengay Newton and Herb Polson for BayWalk’s impending demise:

“When BayWalk is boarded up and completes its transformation from downtown St. Petersburg’s jewel to its biggest eyesore, we will know whom to blame. When Muvico closes and there is not a single movie theater in a city that is supposed to be major league, we will know where to point the finger. And when that blight causes the windows in those shiny new condos to remain dark and other downtown storefronts to close, we will know whom to call for an explanation…”

Mr. Nickens and the other proponents of the sidewalk vacation miss the point. We are all to blame for BayWalk’s demise: every one of the parents who abandoned their children at the complex on Friday and Saturday nights; every one of the unruly tennagers who made BayWalk uncomfortable for all patrons; every one of the politicians, like Rick Baker and Bill Foster and Kathleen Ford, who stood by as BayWalk withered away over the last four years, just like so many of the city’s other landmarks — The Pier, Albert Whitted Airport, Central Avenue, Tropicana Field, Williams Park.

As I said to the City Council during the public forum of Thursday’s vote, this episode is a plague on all of our houses.

But the real reason why this vote failed has nothing to do with protesters or unruly teenagers or Rick Baker. This effort failed because of a lack of understanding of realpolitiks by the St. Petersburg Chamber of Commerce and the business community it represents.

Because $5,000, give or take, in $250 and $500 contributions to City Council Chair Jeff Danner’s re-election campaign would have all but guaranteed his vote (which would have brought along Curran’s or Paulson’s). The vote to vacate the sidewalk would have passed 7 to 1.

That’s not to say Jeff Danner’s vote was for sale. Far from it! Jeff Danner is an independent leader with unquestioned integrity. His vote on this matter, like any other issue, cannot be bought. But Danner had to wonder why he should carry the water for the business community when few of its prominent members have gotten engaged in the local political process.

Every single person who spoke for BayWalk at the public forum should have been at Jeff Danner’s fundraiser. Just as they some of them should be at events for Leslie Curran and Karl Nurse and Steve Kornell and Angela Rouson and Steve Corsetti and Jim Kennedy. And they don’t have to contribute. This isn’t about money buying votes. It’s about people with money getting involved in the political process. It’s embarrassing that Jeff Danner and Leslie Curran have raised only a few thousand dollars for campaigns in a city of 240,000.

Instead none of leaders of the business community bothered to show up at a fundraiser for the Chairman of the City Council? And they wonder why this vote failed?

If this were Tampa, Orlando or, God forbid, Miami, the John Long of those cities would be hosting the fundraiser for the Jeff Danner of those cities.

Actually, The St. Pete Chamber of Commerce and its allies seem to be inept when it comes to political matters. It took their public affairs staffer, Jesssica Eilerman, four days (after she contacted the candidates) to distribute a media release about which candidates the St. Pete Chamber endorsed in this year’s elections.

The St. Pete Chamber’s political ineffectiveness is emblematic of the larger issue of the business community’s failure to mount successful local campaigns. In 2007, outsider Bill Dudley beat Chamber fave Ed Montanari for a seat on the City Council.

And don’t even get me started on the baseball team handling of its effort to get a new stadium. When they launched their effort to build a stadium on the waterfront, the Tampa Bay Rays dropped the ball in organizing a local, public relations campaign. I mean, what is $1 million in local PR work compared to getting approval for a billion dollar stadium?

Or as Thursday’s vote demonstrates, what would a few thousand dollars matter compared to $6 million in redevelopment work? The St. Pete Chamber and the business community it represents is both penny and pound foolish.