Menu
Of the numerous choices which could qualify as the worst trend developing out the St. Petersburg Mayoral Campaign, the worst has to be the idea of candidates doing their impression of Sam Malone. I count at least three candidates who have either been a “guest bartender” for a fundraiser or have led their supporters on a “pub crawl.” Another candidate hosted a major volunteer event at Push Ultra Lounge. And don’t forget one mayoral candidate owns his own restaurant, so he can tend bar whenever he wants.

With the way the tap is flowing, you’d think the 2009 St. Petersburg Mayoral Campaign was being sponsored by Budweiser or Miller Lite or Guinness? Well, probably not Guinness, because the words “brilliant” and “St. Pete politics” aren’t often used in the same sentence.

As if politicians were not already associated with heavy drinking (those busted capillaries don’t just spring up naturally), now we have local candidates just drinkin’ and campaignin’ their way into voters’ hearts. Well, friends don’t let candidates campaign and bartend, so someone should tell Jamie Bennett, Larry Williams and the rest of these stiffs to get from behind the bar. 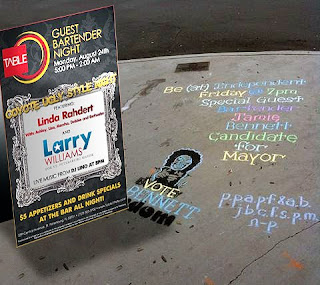 So let’s put a prohibition (get it?) on any more candidates guest bartending.