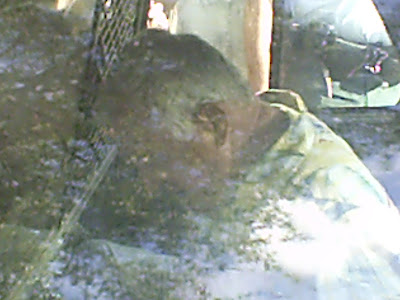 This is a picture of 76-year-old Frederick Dudley, brother of City Council member Bill Dudley, being hauled away (dude, I know the feeling) by the St. Petersburg Police after starting a fight.

A fight broke out during a city hall meeting Thursday, leading to the arrest of two men. The men, one of them the brother of Council member Bill Dudley, were arrested on a charge of disorderly conduct. They are being transported to the Pinellas County Jail. The fight started immediately following a controversial vote about privatizing a strip of sidewalk in front of downtown’s Baywalk. Just before 5 p.m., council members decided the city will vacate the sidewalk. Seconds later, the men – 76-year-old Frederick Dudley and 61-year-old Ronald Deaton – began grappling with each other. Police officers and onlookers rushed in. St. Petersburg Police spokesman Bill Proffitt said it is still unclear who started the fight. “It looks like after the Baywalk vote, people in the galley started shouting,” he said. “These two exchanged words. They both got up and it became physical.” No one else was injured, but a female police lieutenant did get blood on her uniform from a cut on Deaton’s arm.

Ok, here’s what happened, according to Cristina Silva, who has really done great reporting on this issue and the Mayor’s post-primary: the vote to vacate the sidewalk outside of BayWalk passes with Herb Polson switching his vote. The Rev. Bruce Wright yells out that the City Council is full of shit. Councilman Bill Dudley says something aloud about the City Council being full of holy shit.

Dudley charges at Deaton, grabbing him by the throat. Deaton grabs back. They hurl each other on the floor, where all you see is arms flying. Finally, the police jump on Deaton, not Dudley.

After the police pile on Deaton, Dudley starts walking around the council chamber, talking with the council members.

The protesters yell at the police to get off Deaton because he is old and his arms can’t be bent behind his body. The police are trying to handcuff him.

The police allow Deaton to stand up.

Only after the protesters protest enough that Dudley started it, do the police grab him.

The overriding question after watching this video is why did they arrest Deaton first without putting Dudley in handcuffs as well. Deaton defended himself against Dudley’s attack, yet it was Deaton who ended up in cuffs. I can see why they both ended up in the sling, but Dudley should have been immediately restrained. Developing…