Menu
Don’t know where they were, why they left or why they’re back, but the snarkies at St. Petersblog, known around these parts as “that other St. Petersblog,” woke up from three or four months of inactivity to blast Scott Wagman:

“This dude is going to be seriously pissed when he wakes up on November 4 and realizes he has spent a small fortune on yard signs, Google ads and a team of people annoying me with shitty e-mails. Hell, he may be pissed on September 2, but you have to guess that the sheer number of times people will see his dumb signs will get him through the primary.” 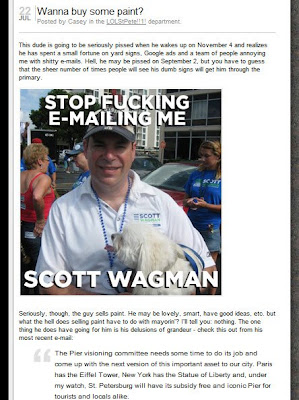 The anonymous St. Petersblog was able to do in one post what I’ve been trying to accomplish with six months of writing. Maybe, my blog is the “other” Saint Petersblog.

Charlie Crist. Darden Rice. Ken Welch. Dwight Dudley. There are some prominent Democrats whose names have

Just as the story is breaking about April Sheffield’s multiple issues before the Florida Election Commission,