According to the Florida Division of Elections, to date, Kendrick Meek’s campaign has turned in less than 40,000 verified signatures towards the requisite 112,000 he needs to qualify for the ballot by petition. And while I project they may have as many as 15,000 to 20,000 more petitions floating around in the various Supervisor of Elections’ offices, that still leaves them well short of their goal — with less than four weeks to collect and turn in the petitions.

The urgency of the campaign’s efforts to collect petition is reflected in an e-mail from Meek’s campaign manager — the second one they have distributed in as many weeks: 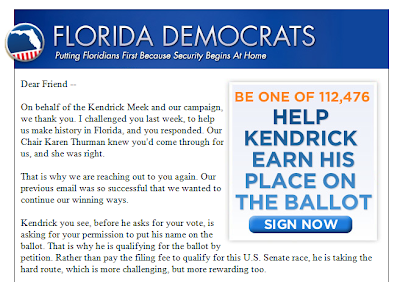 But what if Meek’s campaign is sandbagging signed petitions, thereby lowering expectations, only to create excitement at the last moment when (and if) Meek crosses the finish line?

My sources inside the Meek campaign suggest that the campaign has collected as many as 80,000 petitions to date, perhaps even 90,000 — or almost 50,000 more than is being reported on the Florida Division of Elections website.

Let’s say Meek has collected 80,000 petitions to date, which means the campaign is sandbaggin’ about 30,000 petitions. That leaves them about 32,000 good signatures away from reaching their target (which translates to about needing 35,000 more petitions because 1 in 10 petitions gets tossed for not being up to snuff). 32K more signatures is certainly doable in four weeks. Not easy. But doable, especially if the campaign invests a little money into the effort to insure it accomplishes its goal.

But is sandbaggin’ a good idea? No, it’s not. For a variety of reasons:

1. Expectations are already low enough for Kendrick Meek – Sandbaggin’ petitions and not showing how strong the grassroots effort is for Meek is not the kind of lowering of expectations a campaign wants to see.

2. In terms of media coverage, the campaign has gotten nothing but negative press about its petition drive – Other than the initial coverage that went along with the launch of the effort, the Meek campaign has not garnered the kind of positive media reports it would have liked to see from its efforts. In fact, most of the coverage, on this blog and several others, has been doubtful, if not negative. Meek can expect a days worth of stories if he succeeds in his plan, but still, the campaign will have missed a major opportunity to generate positive press coverage.

3. Too many of the petitions are coming from South Florida – if the state was divided into two and Kendrick Meek were running for Senator of South Florida, he would be the clear front-runner, but since I-4 is a road and not the state line, Meek is all but unknown outside of Broward, Miami and the rest of South Florida. I understand that is his homebase, but should the near-majority of his petitions be coming from Alligator Alley? If the intent of the petition drive was to build a grassroots level of support, the campaign should have reached out more to counties where Meek is still unknown.

4. A catastrophe could occur – Kendrick Meek is a Democrat. And this is Florida. Would anyone be surprised if, on the way to turning in, oh, say 8,000 petitions, a sinkhole opened up and devoured the car in which the petitions were being driven? Or, what’s more likely, is some minimum-wage staffer in Palm Beach’s or Broward’s or Miami-Dade’s Supervisor of Elections office “misplaces” 1,200 petitions and Meek falls short by a few hundred signatures.

All in all, the idea of Kendrick Meek’s campaign sandbaggin’ petitions reminds me of a scene from the movie Seven, in which Kevin Spacey toys with Brad Pitt: