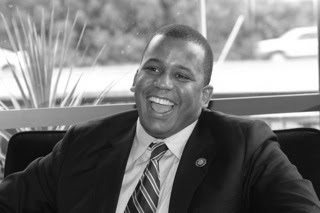 Of course I asked him all of the tough questions, like, “Aren’t you insane to give up a safe seat in the U.S. Congress and a position on the all-powerful Ways and Means Committee to run for the U.S. Senate against (no offense to the increasingly exciting Marco Rubio) a governor with a supersonic approval rating?”

To whit, he provided a great answer about how he has never, in his years of public service, ever done the easier thing. For example, he didn’t have to sit-in to protest Jeb Bush’s effort to dismantle the state’s affirmative action program.

Alright, Congressman Meek, you never take the easy way out. How ’bout a few easy questions:

When you’re not busy fixing the health care system, what do you watch on TV, even if it’s on Hulu? “The Office. That show is too funny.”

And then I asked him the most important question of the interview, my litmus test: Do you watch The Wire? Meek gave me a look that would have intimidated even Clay Davis, as if I were ridiculous for having even asked one of the pre-eminent African-American politicians if he watches the television program known for its Dickensian portrayal of urban life. He answered “Of course,” but what I think what he really wanted to say was: