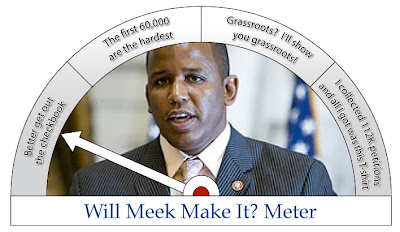 At this point, the prospect of Congressman Kendrick Meek actually collecting the requisite number of voters’ signatures to place his name on the ballot looks about as likely as Charlie Crist winning the GOP nomination: still possible, but no longer probable.

According to the Florida Division of Elections, Meek has collected 35,553 verified signatures through February 22. That means he has to collect another 76,923 signatures before March 29 – a daunting 2,197 good signatures a day.

Based on my research and projections, Meek actually has 42,038 petitions in the system, putting him 70,438 signatures behind. Even by this standard, Meek has to collect more than 2,000 ‘good’ signatures a day.

As impossible as that sounds, Meek may be better off than the data suggests. He just finished an extensive speaking tour of the state, where he was sure to collect hundreds, if not thousands, of signatures. Also, I have the increasingly suspicion that the campaign is sandbagging thousands of petitions, thereby lowering expectations, making it seem all the better when, and if, they cross the finish line.

But at this point, based on the data I’ve collected, I am downgrading Meek’s chances of accomplishing this goal to a full “Better Get Out The Checkbook” on the Will-Meek-Make-It-Meter.