During the last month, I’ve written extensively about how Kendrick Meek’s sisyphean signature-gathering effort is further behind than the campaign wants to admit.

With 45 days left before the March 29 deadline to turn in 112,476 verified signatures, it’s time to update again the status of Meek’s signature-gathering effort. That’s why I am introducing the Will Meek Make It? Meter to track the progress of Meek’s effort to put his name on the ballot via the petition process. As of today, Meek’s effort is dangerously off track, or, according to the Will Meek Make It? Meter, somewhere between “Better get out your checkbook” and “The first 60,000 are the hardest.” 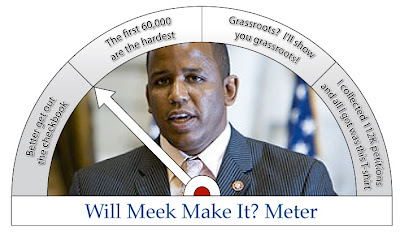 In a conference call last month with a pool of new media writers and bloggers, Meek’s campaign manager, Abe Dyk, responded to a series of questions about the campaign’s signature-gathering efforts. Dyk would not (and has not) talk(ed) specific numbers about where the campaign stood in its effort to collect more than 112,000 signatures from registered voters by March 29, 2010. Pressed for at least an assessment of the campaign’s signature-gathering efforts, Dyk stated that “more than half” (that would be 56,000) of the required number have been collected.

Yet, according to the Florida Division of Elections only 32,534 petitions have been verified as of February 12. I wrote last week that Dyk blames this low number on the fact that the campaign has a “backload” of thousands of petitions still waiting be processed into the campaign’s database. Of course, Dyk said the same thing in November to the St. Petersburg Times:

“There has been a huge data entry back log in our campaign,” he said, noting that the campaign uses much of the data gathered in the petition drives to track and organize volunteers and supporters. “We need to go through each petition and pull that information out and put it into a data base.”

Dyk estimated that the campaign has gathered more than half of the required signatures, but has yet to turn them in to elections officials. The day after the conference call, my blogging colleague — and Meek’s new media director — Kenneth Quinnell followed up a post I wrote about Meek’s Sisyphean task by calling and e-mailing to say that, not only has the campaign collected more than half of the required number, it has already turned in 40,000 signatures to the various Supervisor of Elections throughout the state to be verified. That was a month ago, and yet the Division of Elections still has just 32,534 signatures verified.

To understand the numbers, it’s important to understand that ten counties — Alachua, Broward, Duval, Hillsborough, Leon, Miami, Orange, Palm Beach, Pinellas and Seminole — currently account for 29,534 (91%) of the 32,534 verified signatures, as found on the Florida Division of Elections website. 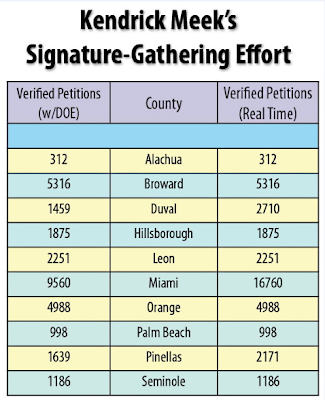 In total, the ten highest-performing counties’ SoEs offices have verified approximately 38,567 signatures – about 6,000 more than what is reported on the Florida Division of Elections page.

So let’s extrapolate: if the current ratio of petitions gathered in the top-performing counties vs. petitions gathered throughout the rest of the state remains constant at about 91%, that means Kendrick Meek has about 42,038 verified signatures — a far cry from the 112,476 signatures he needs to have verified by March 29.
The bottom line: Kendrick Meek’s campaign has turned in far fewer petitions than what the campaign attests. Furthermore, based on these numbers, the campaign has not collected anywhere near even half the required signatures to qualify for the ballot, as Abe Dyk has stated. Based on my projections, Dyk and Co. would have to be sitting on 14,000 petitions waiting to be data-entered by the campaign — and that would still only get them to the half-way mark.

Also, don’t blame the bureaucrats — there are few “backlogs” at any of the Supervisor of Elections’ offices; I spoke with each of the supervisors in charge of each county’s verification process and, unless they provided me with a new number, they each said there were no petitions in their offices waiting to be processed.

What do these actual numbers mean for the petition-gathering process? Can Meek still qualify by the ballot by petition? Absolutely! And posts like this will probably only motivate his campaign more. But the task in front of Meek is, as I’ve said, Sisyphean. By my projections, the campaign has 42,038 verified signatures in the bank. By that standard, the campaign still needs to get 70,438 signatures verified by the deadline — a pace that equates to needing 1,565 verified signatures a day. (When I first wrote this story, the campaign was on pace to need 1,281 signatures a day, so the campaign’s effort has really fallen off since I first reported.)

How difficult is it to collect 1565 good petitions a day? So far, the campaign has collected 1875 signatures to date in Tampa and Hillsborough County he state). Between now and March 29, Kendrick Meek’s campaign has to duplicate its efforts in Hillsborough about 38 more times.

But instead of focusing on the signature-gathering effort — the crux of his campaign’s legitimacy — Meek has been busy sponsoring a NASCAR racer.

Maybe it’s time Meek focus on getting his campaign on-track.