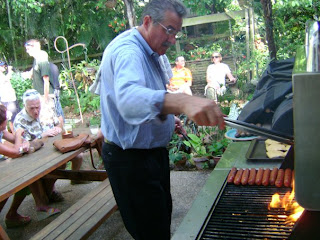 There are two interpretations of this photo of Jamie Bennett posted on his revamped, albeit underwhelming Facebook profile (please Jamie, update your Twitter account — it’s been 44 days.) On one hand, the picture shows the Jamie we all know and love; BBQ Jamie, happily grilling sausages at a too low-key event for his remaining volunteers. On the other hand, there is a man with more gray hair than he had six months ago, a loss of hair color for which I am mostly responsible. But this grayer, more sober Jamie Bennett has shed a few pounds and just wowed the crowd, or at least Howard Troxler, at the Tiger Bay mayoral forum. Troxler wrote: “Bennett, a sitting City Council member, is rehabilitating himself from his scandal involving the use of city-controlled baseball tickets as a campaign goodie. He came across Wednesday as equally or more knowledgeable on specific issues than other council veterans. More compassionate and nuanced, too; a guy who knows how to work the process. So my debate winner, graded on a curve, is…Bennett.”

So, the question is, can Jamie Bennett make a comeback? The answer, unfortunately, is no. And not because of the failed campaign he has ran. I won’t be critical of his campaign anymore. Why kick a dead horse? The problem with Jamie Bennett’s renewed candidacy is his position on the major issue facing St. Petersburg: crime. Bennett is too much of an apologist for the city’s failings on crime, specifically, its inability to effectively combat homelessness, panhandling, etc.

If you read the letters-to-the-editor or the comments on blog posts, or if you listen to the small business owners on 4th, MLK or 34th Streets, you can begin to get a feeling for the sheer unrest there is with City Hall over its inability to address, much less solve, these issues.

Don’t get me wrong. The reason I wanted to originally work for Bennett was his courageous stand against the tent slashing.

But I am a liberal Democrat. And with Deveron paid in full on the black vote, and Wagman positioned to the left of Nancy Pelosi, Bennett has no room to run.

Bennett will be holding a Brown Bag lunch and informal discussion on the environment at [email protected] on Tuesday at noon.

Dan Raulerson and I disagree on many things about policy