Menu
Bill Foster must be behind in the polls. A front-runner does not launch this kind of barrage of negative, err, comparative advertising. So with Foster behind in the polls, that means it’s Hebert-time as in Jack Hebert, Bill Foster’s hired gun who is at his best — and worst — this close to an election.

First, there was this television spot. Not terribly inventive. In fact, I am surprised the uber-creative Hebert didn’t lighten these ads with a little humor:

Arriving in mailboxes today was this postcard, obviously designed to reinforce the television spot: 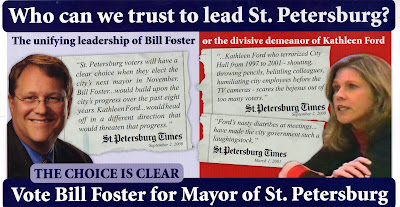 Just remember what Bill Foster said to reporter Cristina Silva after he announced he was hiring Hebert’s Mallard Group to consult on his mayoral bid:

“I will not go negative at all. It’s going to be issue-driven and will have nothing to do with what the others are saying,” he said in an interview in January. Campaign consultants, Foster said, “all can go below the belt. It’s within the control of the candidate to keep everything positive.”