Consumer sentiment among Floridians surged up 6.9 points in December to 97.2, according to the latest University of Florida consumer survey. This is the highest reading since March 2015 and the second-highest since February 2004—before the Great Recession of 2008.

All five of the components that make up the index increased.

Perceptions of one’s personal financial situation now compared with a year ago rose 1.4 points, from 81.5 to 82.9. Opinions as to whether now is a good time to buy a big-ticket item such as an appliance jumped 8.2 points, from 92.6 to 100.8, with a particularly sharp increase among those 60 and older.

“Perceptions of present conditions have largely improved as a result of the buying conditions in the holiday shopping season in conjunction with the strength of the state’s economy,” said Hector Sandoval, director of the Economic Analysis Program at UF’s Bureau of Economic and Business Research.

“Overall, Floridians are far more optimistic this month,” Sandoval said. “The gain in December’s sentiment reading comes mainly from consumers’ future expectations about the economy, independent of their demographic characteristics and socioeconomic status. These are very positive signs, which provide great conditions for the upcoming change in federal government.”

The Florida unemployment rate ticked up one-tenth of a point to 4.9 percent in November. As 2016 ends, the Florida labor market is in its best shape since the Great Recession with sustained job gains over the last years. Compared with last year, the number of jobs added in November statewide increased by 3.2 percent.

For the second quarter of 2016, the most recent figures available, Florida’s gross domestic product grew by 2.3 percent, the highest rate in the Southeast and seventh in the nation, according to the U.S. Bureau of Economic Analysis.

Moreover, the Federal Reserve’s recent decision to raise interest rates by a quarter of a percentage point reflects their confidence that economic activity nationwide will keep expanding and the labor market will strengthen further.

Florida consumer sentiment is back to the high levels observed between 2001 and 2005 before the economy showed signs of the housing market crisis that led to the Great Recession.

“The year is ending with an important increase in consumer sentiment among Floridians and a positive economic outlook both nationally and at the state level. Despite the potential uncertainty due to the change of the administration next year, we expect consumer sentiment in January to remain around the average levels observed in the past two years,” Sandoval said.

He also observed that consumer sentiment is significantly higher compared with December 2015. “One can expect holiday sales to perform better than last year,” Sandoval said.

Conducted Dec. 1-18, the UF study reflects the responses of 418 individuals who were reached on cellphones, representing a demographic cross-section of Florida.

Details of this month’s survey can be found at www.bebr.ufl.edu/csi-data. 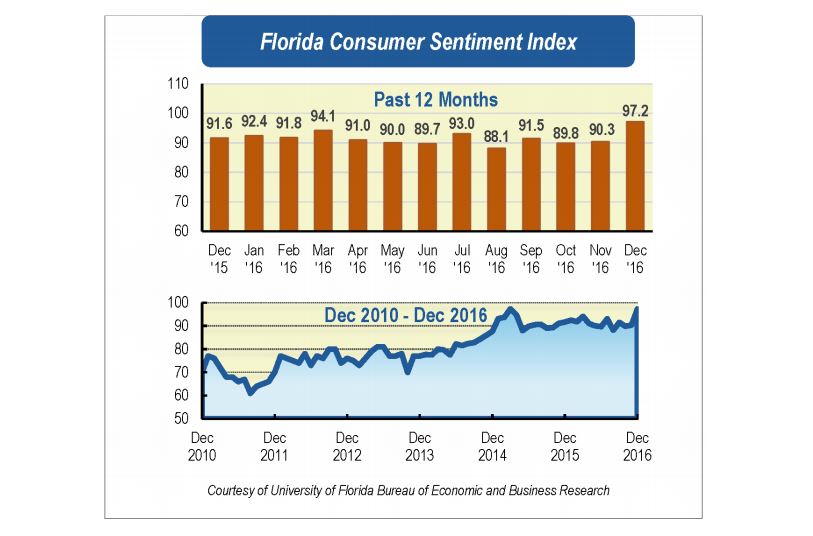