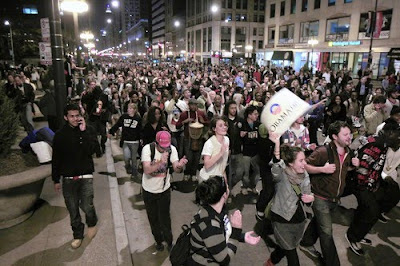 Campaign after-parties are for me what weddings are for most other people…the best place to get laid without having to pay. Here’s the rundown of where the candidates will be:

Jamie Bennett is partying at home with his wonderful wife, who yesterday was classy enough to flick Barry Edwards the middle finger while waving signs. Classy, Aimee, classy.

In one of the more interesting cases of downstairs-upstairs, Kathleen Ford will be celebrating at Red Mesa Cantina, while Deveron Gibbons goes Kanye at Push Ultra Lounge.

Bill Foster will be planning his general election strategy at Midtown Sundries, an underrated joint that serves up great barbecued buffalo wings. And who’d want to miss a party attended by both Mamma Tee and Virginia Littrell?

Scott Wagman will be picking up the tab at Outback Steakhouse on 4th Street North. There is some irony in the most liberal, most environmentally-conscious candidate picking a corporate steakhouse for his campaign’s after-party. But you should certainly stop by because this may be the last anyone sees of Toni Molinaro.

Larry Williams is opening up the old Louis Pappas’ restaurant on 4th Street North. I ran into Pam and Larry last night (along with Ambassador Mel Sembler, who thinks the race will come down to Ford and Foster) and they were just great. After a grueling campaign, Pam let her hair down and said some really nice things. Larry was upbeat and classy. Not in the Aimee Bennett way, mind you.

The Democratic Party, err, I mean Karl Nurse, will be celebrating at Bella Brava, where I will also be because it’s my regular hangout. I’ve got two bottles of champagne already chillin’, one in case Scott Wagman loses, the second one there in case he wins and I have to drown my sorrows.