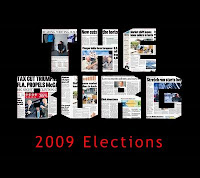 The last coherent thing my father said before he passed three years ago was the famous line from TS Eliot’s Hollow Men:

But what do you say when something was a whimper all along?

The St. Petersburg Mayoral Race comes to its first conclusion on Tuesday and not with a bang but with the whimpering which has marked the entire campaign.

As I have written, this is The Worst Election Ever with a field of candidates so underwhelming that, despite there being ten of them, a third of the electorate remains undecided.

Several of the candidates are, if not embarrassing, just don’t belong on the stage. Their inclusion in the debates and media coverage took away time and attention from the frontrunners who needed to be scrutinized and questioned further. Someone should have played the hall monitor and told Paul Congemi, Richard Eldridge, Ed Helm and John Warren to, literally, stop running. Or more to the point, they should not have been included in the major debates. Helm and Warren should be particularly ashamed for claiming a financial hardship to avoid paying the required candidacy fees, all the while owning bank accounts that number in six figures.

One man who has conducted himself honorably during this election is Larry Williams. There wasn’t enough gas in the tank left for Rip Van Williams to win this race, but, in a noble defeat Williams has the ability to emerge as the elder statesman of St. Petersburg. Just as former Mayor Randy Wedding is held in high regard and asked to lead every committee and commission, so too could Williams if he decides to remain involved.

At first I thought it was courageous for Jamie Bennett to soldier on after his campaign exploded. But Bennett’s flaws as a candidate (flaws I did my best to hide) such as his discomforting public speaking and lack of strategic thinking quickly came to the surface. What would have been really courageous would have been Bennett admitting his mistakes as a candidate and dropping out of the race. But his wife would not let him stop running, so he stumbled on. It’s hard to remember, but there was a moment there when Bennett may have been the front-runner. He had raised a healthy 30K in the first quarter, delivered impressive policy speeches, dominated the forum hosted by the Clutch Hitters and, all in all, had several of his opponents on the run.

With Bennett’s implosion, Scott Wagman has emerged as the defacto candidate of the Democratic Party, minus the African-Americans, the Times or the unions. At certain moments, Wagman’s campaign ha shown flashes of brilliance, while at other moments, such as when I caught him illegally placing 600 yard signs or his decision to contest my complaint about his Google ads, it appeared as if the candidate was completely tone deaf. But it wasn’t just the missteps that doomed Wagman’s campaign.

Wagman was never going to win because of his decision to hire Larry Biddle, Mitch Kates, who bragged Wagman would raise 500K and Toni Molinaro, who could not even win her own precinct. That will end up costing him a quarter of a million dollars while leaving Wagman with nothing to show for his efforts. Kates’ recent snide remark about ‘candidates waving at cars’ captured in a nutshell what is wrong with his perspective on political consulting. After Wagman loses, and make no mistake Wagman didn’t not win, he will have lost, Kates and Molinaro will have difficulty convincing anyone that their “Facebook this, Twitter that” strategy works.

As for the top three, I would like to say that Deveron Gibbons is going to finish third behind Kathleen Ford and Bill Foster, but I think brotherman has shucked-and-jived his way into the General Election. Actually, I’ve always thought Gibbons was going to make the General Election, despite all my efforts to stop this.

In my book, that leaves either Ford or Foster on the outside looking in. Something has to be said for how Bill Foster has withstood the attacks of Equality Florida, Gibbons, Wagman and Williams over the last week. My only hope is that Foster was far enough ahead before the attacks began that they did not damage him enough to see Ford make it to the General Election.

So, in contrary to every poll published, here is my predicted order of finish:

If you are interested in placing a friendly side-wager, please email me at [email protected]

Unlike the rest of the St. Petersburg City Council, Steve Kornell remained neutral in the mayoral

Unlike the rest of the St. Petersburg City Council, Steve