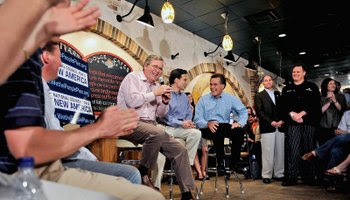 Former Florida Gov. Jeb Bush said Saturday that it’s time for the Republican Party to give up its “nostalgia” for the heyday of the Reagan era and look forward, even if it means stealing the winning strategy deployed by Democrats in the 2008 election.“You can’t beat something with nothing, and the other side has something. I don’t like it, but they have it, and we have to be respectful and mindful of that,” Mr. Bush said.

The former president’s brother, often mentioned as a potential candidate in 2012, said President Obama’s message of hope and change during the 2008 campaign clearly resonated with Americans.

“So our ideas need to be forward looking and relevant. I felt like there was a lot of nostalgia and the good old days in the [Republican] messaging. I mean, it’s great, but it doesn’t draw people toward your cause,” Mr. Bush said.

“From the conservative side, it’s time for us to listen first, to learn a little bit, to upgrade our message a little bit, to not be nostalgic about the past because, you know, things do ebb and flow.”

The Florida governor joined former Massachusetts Gov. Mitt Romney and House Republican Whip Eric Cantor on Saturday at a small pizza parlor in Arlington for the inaugural event of the National Council for a New America (NCNA).

Mr. Cantor said meeting with ordinary folks is the key way “to begin a conversation with the American people” and explain Republican principles to anyone who will listen.

The NCNA – with a “national panel of experts” made up of Mississippi Gov. Haley Barbour, Louisiana Gov. Bobby Jindal, Sen. John McCain of Arizona and Mr. Bush and Mr. Romney – says the goal of the listening tour is not to recast the party.

“This is not about messaging, this is not about branding,” Mr. Cantor told The Washington Times. “This is about trying to foster some discussion, because what’s going on in Washington right now is not reflective of the mainstream of this country.

“The Republican Party is founded on some common-sense conservative principles that are as effective today as they’ve always been. We just need to make sure we’re listening to the people,” he said.

Mr. Romney said as well there will be no wholesale changes to the core tenets of the party. “I think the principles remain the same,” he told The Times after the hourlong session. “I think we have to be very clear in what we stand for and make sure that the American people understand that we’re in this to help America’s future and their families.”

Republicans were hammered in the 2006 midterm elections – losing the House and Senate in what former President George W. Bush called a “thumpin’ ” – and Mr. Obama won a slew of once-staunch Republican states in his decisive 2008 victory. Many in the party were not thrilled with GOP candidate Mr. McCain, a self-described “maverick” who often shunned core Republican principles.

Since the election, the party has fallen into disarray. Republican National Committee Chairman Michael S. Steele is not particularly popular among the conservative core; and while the 2012 election seems far off, the next election is 18 months away.

Adding to their woes, Sen. Arlen Specter of Pennsylvania announced last week that he would switch parties and become a Democrat, citing his disgust with the big-tent party under President Reagan that he said is now far more exclusionary.

Although the three potential Republican candidates had their shirtsleeves buttoned at the wrist during the informal pizza parlor session, they said they planned to roll up their sleeves and get to work rebuilding the party.

“Our party has taken its licks over the last couple of cycles,” Mr. Cantor said. “No one is under any illusion about that. But that’s why we’re here … to re-engage and partner with the people of this country. … We’re looking to the future.”

Said Mr. Romney: “For America to move forward, they’re going to want to see a party that has answers, not politics.”

While he said. “We don’t have to come up with all the answers today, thank heaven,” he added, “but certainly by 2010, we better.”

Mr. Bush was the most forthright of the panel, repeatedly returning to the notion of looking forward, of the need to first and foremost “create a consensus around 21st-century ideas that truly matter for American families.”

“We have principles, we have values. They are the values that are shared by the majority of Americans, there’s no question about it. But we have to now take those principles and values and apply them to the challenges that our country faces today and in the future. …

“And then, hopefully – God willing – [we] embrace our conservative principles and take these new ideas and present them to the American people,” he said.

The message resonated with many of those who turned out at the Pie-Tanza restaurant, right in the heart of a firmly liberal community.

“We don’t have to compromise our beliefs,” said Brian Summers, a black Republican from the District. “This is our party, our country. We should stand strong, stay faithful to what we firmly believe, and go forward.”

But Mike Collins, a former RNC press secretary from Vienna, Va., who now runs a public-relations firm, said there is an urgent need for the party to rethink its strategy.

“We need to be much more articulate and reach out to demographics we’re not reaching right now – Hispanics, suburban women, regions of the country that currently we’re not effectively talking to,” he said.

Mario H. Lopez, president of the Hispanic Leadership Fund, agreed, and he applauds the effort by the Republican leaders.

But the Hispanic leader closed with a warning: “The fact is, if they want to be a governing majority again, they have to do that.”

Presumably, Lawrence McClure will vote for himself in next month’s Republican primary election in House District

Presumably, Lawrence McClure will vote for himself in next month’s