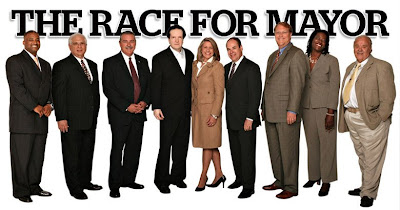 So the Times has a great new feature on The Race for Mayor of St. Petersburg. My problem with it is the picture they are using to promote it.

Deveron Gibbons was not present at that photo shoot, but this picture would have you believe that he was. The Times needs to disclose that that image is not a picture. Splitting hairs, you say? No, not really, because Deveron’s absence reflects two larger trends.

First, is Gibbons’ aversion of the Times and its reporters. Gibbons is running the most close-mouthed campaign of all the major candidates. Right or wrong, this is a strategic decision which demonstrates what kind of Mayor he would be. Secondly, Deveron Gibbons has a reputation for involving himself in activities and then not fully engaging. Don’t believe me? Look at the minutes of the Pinellas County Housing Authority, a board from which Gibbons just resigned. Or look at the fact that Deveron resigned from all of his civic positions to focus on his mayoral campaign.

I’ve been by Jamie Bennett’s side for the last four months, and I have yet to see Deveron at more than a handful of the community functions he belongs at. Take for example, the opening night reception at the Carter Woodson honoring Negro League Baseball. Deveron either was very late (his fiancee was heard complaining to him on the phone about his tardiness) or did not bother to show. Like so many other activities, Deveron’s absence or tardiness reflects on him.

As for the journalism ethics of the matter, I think the Times should go ahead and let its readers know that this is not a group photo, but a composite.