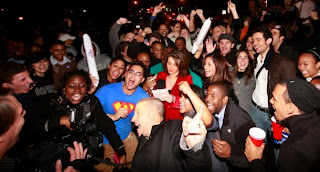 Take a look at today’s agenda for the St. Petersburg City Council and you may notice that Councilman Jim Kennedy has introduced a new business that “evaluate the benefits and detriments of expanding the hours for sale of alcohol and packaged goods.” (Update – 10:53 a.m. The City Council unanimously agreed to refer Kennedy’s proposal to committee. 10 Connects story on this issue can be viewed here.)

According to another member of the City Council supportive of the idea, Kennedy is interested in pushing back “last call” for the sale of alcohol from 2 a.m. to 3 a.m. The initiative is designed to bolster St. Petersburg’s struggling bar and restaurant scene.

As I previously suggested, the city should relax the “last call” rules in a couple of targeted areas, such as along Central Avenue, east of 4th Street, in an effort to create a late-night district. This “3 a.m. District” would shore up the fledgling section of Central Avenue that begins at the Emerald Bar, trolls along by Savannah’s and Ferg’s and then finishes off in Grand Central at Beak’s and Queenshead.

Perhaps the biggest obstacle to a later last-call for St. Petersburg is new Mayor Bill Foster, who, in 2003, voted to kill the proposal that allowed sales before 1 p.m. on Sunday (a proposal that later passed). Then-councilman Foster said:

“I can’t imagine the Vinoy (Renaissance Hotel) starting a marketing campaign saying, ‘Oh, you should stay here instead of the beaches because you can buy beer before 1 p.m.’ “

Kennedy’s proposal could be the first major test to determine whether Foster’s holier-than-thou attitude has mellowed since his time on City Council.

The Pinellas County Supervisor of Elections office on Friday said