Menu
The question “Who says…?” is at the center of the debate between Steve Kornell and Angela Rouson in their campaign to win the District 5 seat on the St. Petersburg City Council. Both candidates mailed direct mail-pieces (both of which are heads-and-shoulders better than the butt-wipe the Mayoral Candidates mailed out) to the so-called early voters and the differences between the two is obvious: Steve Kornell is a recreation leader, Angela Rouson is a leader, period.

Kornell’s mail-piece is actually a response to Rouson’s mail. Kornell’s piece asks who thinks he’s the better choice for City Council and it answers with that lame brag about Kornell winning 53 percent of the vote in the district primary, as if that makes any difference to undecided voters outside of the district. 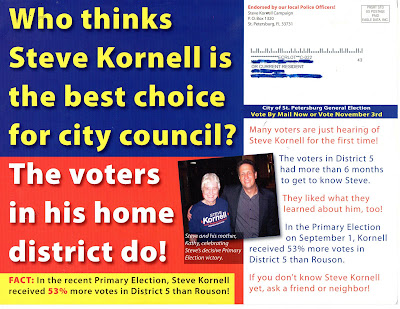 The reverse shows a series of pictures that reinforce the idea that Steve Kornell must have made a great recreation leader. Kids here, gothic Young Democrats there and lots of primary colors. I don’t know if this mail-piece is an advertisement for the Police Athletic League or for a serious political candidate… 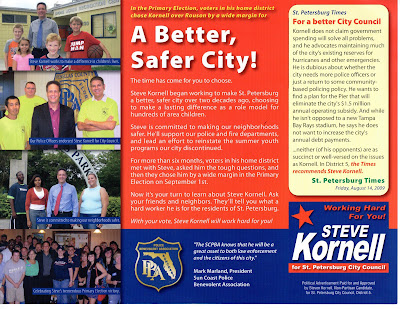 …Like Angela Rouson. Rouson may not win this election but it won’t be because of her direct mail. Her piece is an example of simplicity done right.

There’s a sharp, professional picture of her on the front. And while it won’t make a difference to anyone but an awards committee, there are subtle design features to Rouson’s mail that make it more attractive. Better fonts, better leading and kerning, the use of a gradient for a background, rather than just slapping together puzzle pieces and filling up the entire page. I mean, I look at Steve Kornell’s mail and wonder if his designer, whoever it is (hoping it’s not you Gregory), ever met an eyeline. 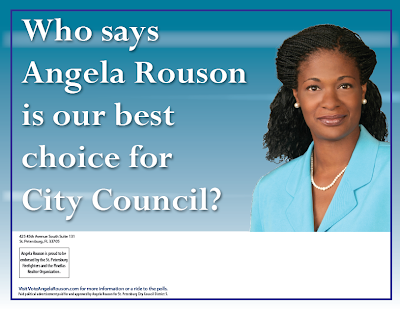 The point of Angela’s mail-piece is that she is a real leader, someone who has worked in a bipartisan fashion with other leaders at all levels of local government to make a positive impact in the community. Is there any other candidate in a competitive election who would be able to draw support from both Rick Baker and Ken Welch and Janet Long? I doubt it. 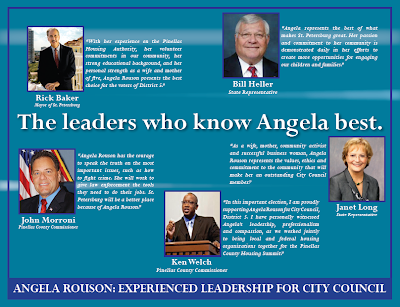 The race for District 5 is turning out to be as interesting a campaign as the Mayoral Race. Just look at the back-and-forth on the Bay Buzz blog.

Both candidates are running impressive campaigns. Kornell just turned in a fundraising report that showed, thanks to Kornell’s support in the gay community and $1,000 from failed mayoral candidate Scott Wagman, he raised more money than all of the other candidates but Bill Foster. Of course, my wonderful friend Darden Rice outraised my client Earnest Williams in 2005 and Chris Eaton raised more than Virginia Littrell in 2001 and neither of those openly gay candidates were able to win citywide.

Kornell’s supporters on the Bay Buzz don’t seem to care for Rouson’s decision to utilize an electronic billboard to communicate her message in the west section of St. Petersburg, but with ads like the one below, beaming to thousands of voters a day, I think it’s a smart investment.

But what has the Buzz, and, in fact the community at large, buzzing is the fact that the gay community has turned Steve Kornell’s campaign into a moral crusade.

This is a tough position for me, because I am a staunch supporter of full gay rights (although I don’t know where I stand on transgender issues, but that’s because I really haven’t thought about the matter enough), yet I think Angela Rouson is the best choice for the City Council.

My opposition to Steve Kornell is not that he’s a bad guy or because he’s an unimpressive speaker. And it’s certainly not because he is gay. I just don’t believe he is ready to lead an entire city. I can’t envision him being a strong force on the City Council. Do I think he will be a bright symbol for the gay community? Certainly, but I can’t vote for him for that reason.

In fact, what angers me the most is that his campaign has been hijacked by the worst elements of the local Democratic Party, such as Mike Fox and Jim Donnelon. Moreover, organizations like Equality Florida and the Stonewall Democrats have cast this race as a referendum on gay rights, yet some blame me for playing the “gay card” (the King of Hearts, I presume).

Actually, I was not the first to inject sexual orientation into this race. Steve Kornell was. Before he posted a video about any other serious issue, Steve Kornell posted the one below, in which he answers that he is, in fact, gay. I thought it was a courageous act, but I don’t think it’s germane for a candidate to, as their first multimedia act, to post a video about being gay. What about rising crime or the budget. Unfortunately for Steve Kornell’s supporters, those kind of issues are secondary to sexual orientation. If they are a primary concern for you, you’ll say that Angela Rouson is the best choice for City Council.