Menu
Scott Wagman’s campaign debuted its first television commercial. I haven’t seen something so bad since I walked out of Transformers: Revenge of the Fallen.

Somehow and for some reason, Wagman’s consultants have convinced him, not that crime is the number one issue with voters (that’s obvious), but that voters most concerned about crime will vote for Scott Wagman over Bill Foster, who is endorsed by the PBA, or Kathleen Ford or Larry Williams. That’s a huge assumption and one I believe will lead to Wagman finishing fourth on September 1st.

Nevermind the fact that Wagman is trying to talk about how tough he will be on crime when article after article has been published with the words “Wagman” and “illegal ads” and “complaints” in the same sentences.

Yet, over the course of the last week, I worried that, maybe, all of the attention given to Wagman on this issue may push him into the general election. But then I read the comments at the end of the articles written about him and saw the vitriol the average reader has for any candidate who tries to circumvent the rules and I started to feel better about Wagman losing. Then I saw this TV commercial and I ordered two bottles of Tattinger in preparation for the celebration I will enjoy once Wagman loses.

This commercial isn’t horrible. It’s not Bay City Plywood. It just makes me think of the t-shirt I’m gonna buy Wagman after he loses. It’ll say “I spent $500K on my mayoral campaign and all I got was this t-shirt.”

Actually the first six seconds, in their busyness, could’ve set up a decent commercial…if you believe, strategically, Wagman should be talking about crime. Of course, I don’t understand why this a PowerPoint presentation rather than a real commercial considering all of the time and all of the money Wagman has to invest.

After the introduction, I get lost. The Wagman logo disappears off the screen and there are some statistics that really don’t add up. All of this set against a badge backdrop that is suppose to make a viewer think “tough on crime.”

So up to this point, we’re at 16 seconds of Powerpoint with scarcely a mention of Wagman. Then things really get interesting. Doc Brown teleports us back to 1984 so that we can take a look at Scott when he still had hair on top and on his face.

Then we get what should have been the money shot: Wagman with other elected officials, except the editor laid in some ridiculous snipe and ruined the shot:

Then we get the pinkie ring. 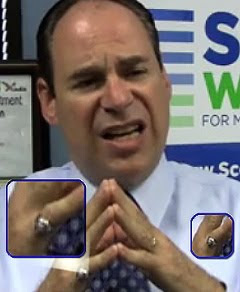 By this time, watching Shia LaBeouf butcher his lines would be more interesting. After 30 excruciating seconds, I am reminded of so many things: the importance of production values, the beauty of Wieden and Kennedy’s work for Nike and where is Beth Houghton in all of this? Why wasn’t this first commercial an introductory spot? Why hasn’t Scott been on TV since, like, Memorial Day? Where is the plaque for alternates? In this case, it’s in the same place as the trophy for a candidate finishing fourth, despite the support of the newspaper and a budget of $500,000.

The plaque for the alternates is down in the ladies room, Scott.